One of my earliest conversations about programming went like this:

Programmers have it too easy these days. They should learn to develop in low memory environments and be more efficient.

…though it’s not like the first code I wrote was for a graphing calculator packing a whole 24KB of RAM. By the way, what are you doing on my lawn?

The principle remains though: be efficient with the resources you have, because what Intel giveth, Microsoft taketh away. My professional work is focused on this kind of efficiency; low-latency financial markets demand that you understand at a deep level exactly what your code is doing. As I continue experimenting with Rust for personal projects, it’s exciting to bring a utilitarian mindset with me: there’s flexibility for the times I pretend to have a garbage collector, and flexibility for the times that I really care about how memory is used.

This post is a (small) case study in how I went from the former to the latter. And ultimately, it’s intended to be a starting toolkit to empower analysis of your own code.

When I first started building the dtparse crate, my intention was to mirror as closely as possible the equivalent Python library. Python, as you may know, is garbage collected. Very rarely is memory usage considered in Python, and I likewise wasn’t paying too much attention when dtparse was first being built.

This lackadaisical approach to memory works well enough, and I’m not planning on making dtparse hyper-efficient. But every so often, I’ve wondered: “what exactly is going on in memory?” With the advent of Rust 1.28 and the Global Allocator trait, I had a really great idea: build a custom allocator that allows you to track your own allocations. That way, you can do things like writing tests for both correct results and correct memory usage. I gave it a shot, but learned very quickly: never write your own allocator. It went from “fun weekend project” to “I have literally no idea what my computer is doing” at breakneck speed.

Instead, I’ll highlight a separate path I took to make sense of my memory usage: heaptrack.

Turning on the System Allocator

This is the hardest part of the post. Because Rust uses its own allocator by default, heaptrack is unable to properly record unmodified Rust code. To remedy this, we’ll make use of the #[global_allocator] attribute.

…and that’s it. Everything else comes essentially for free.

Assuming you’ve installed heaptrack (Homebrew in Mac, package manager in Linux, ??? in Windows), all that’s left is to fire up your application:

It’s that easy. After the program finishes, you’ll see a file in your local directory with a name like heaptrack.my_appplication.XXXX.gz. If you load that up in heaptrack_gui, you’ll see something like this:

And even these pretty colors: 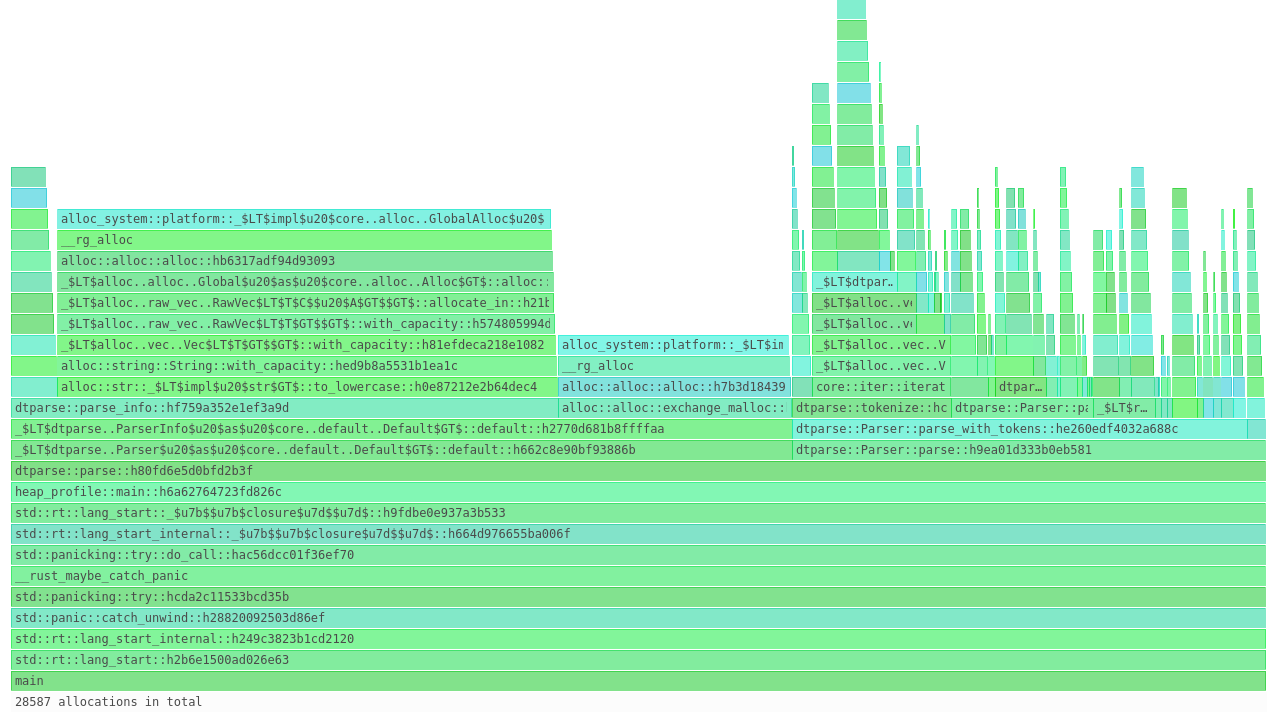 To make sense of our memory usage, we’re going to focus on that last picture - it’s called a “flamegraph”. These charts are typically used to show how much time your program spends executing each function, but they’re used here to show how much memory was allocated during those functions instead.

For example, we can see that all executions happened during the main function: 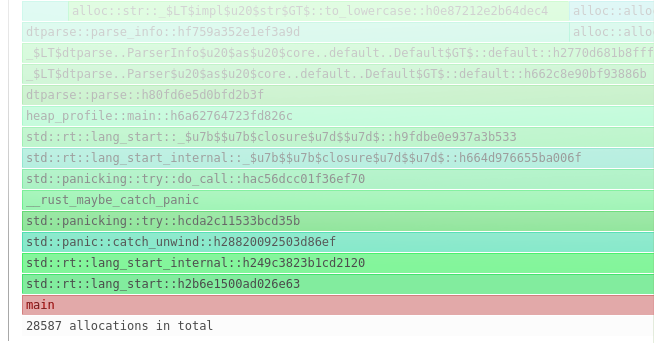 …and within that, all allocations happened during dtparse::parse:

…and within that, allocations happened in two different places: 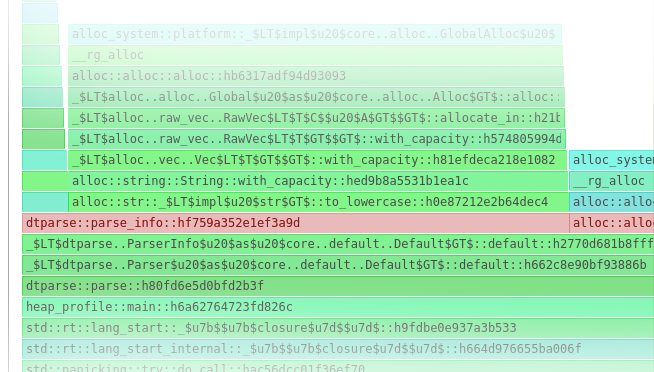 Now I apologize that it’s hard to see, but there’s one area specifically that stuck out as an issue: what the heck is the Default thing doing? 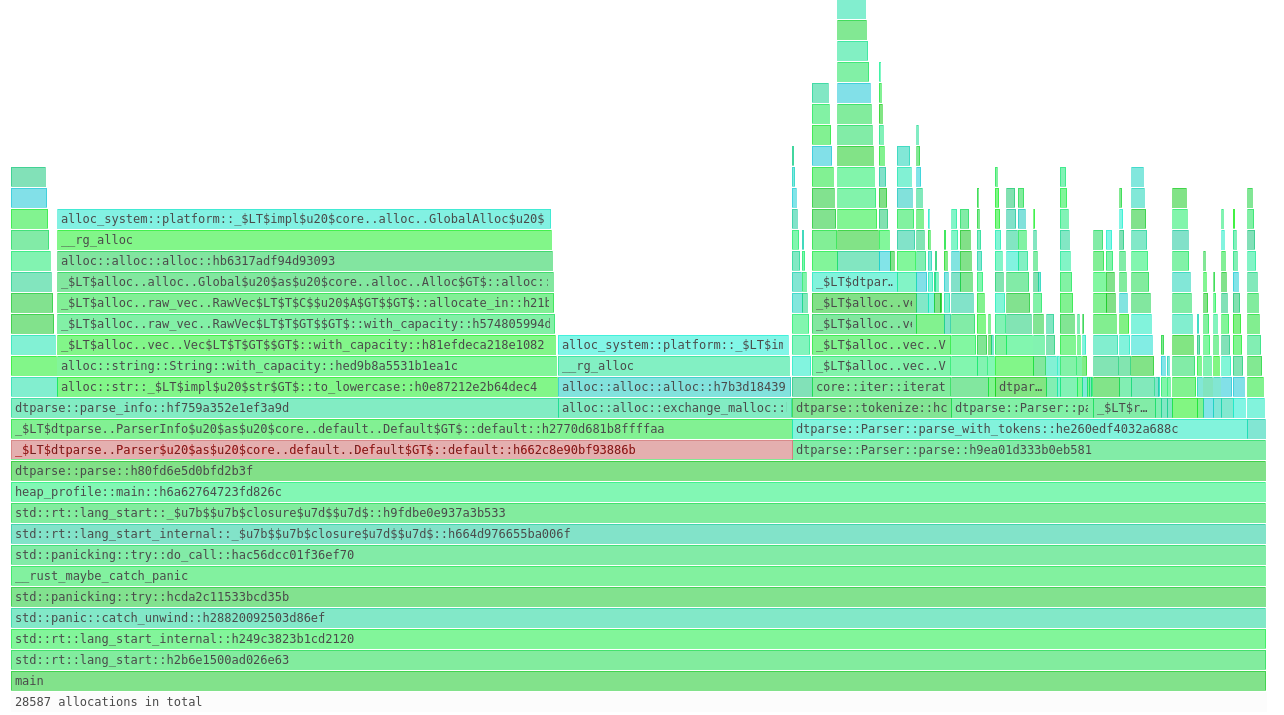 See, I knew that there were some allocations during calls to dtparse::parse, but I was totally wrong about where the bulk of allocations occurred in my program. Let me post the code and see if you can spot the mistake:

Because Parser::parse requires a mutable reference to itself, I have to create a new Parser::default every time it receives a string. This is excessive! We’d rather have an immutable parser that can be re-used, and avoid allocating memory in the first place.

Armed with that information, I put some time in to make the parser immutable. Now that I can re-use the same parser over and over, the allocations disappear: 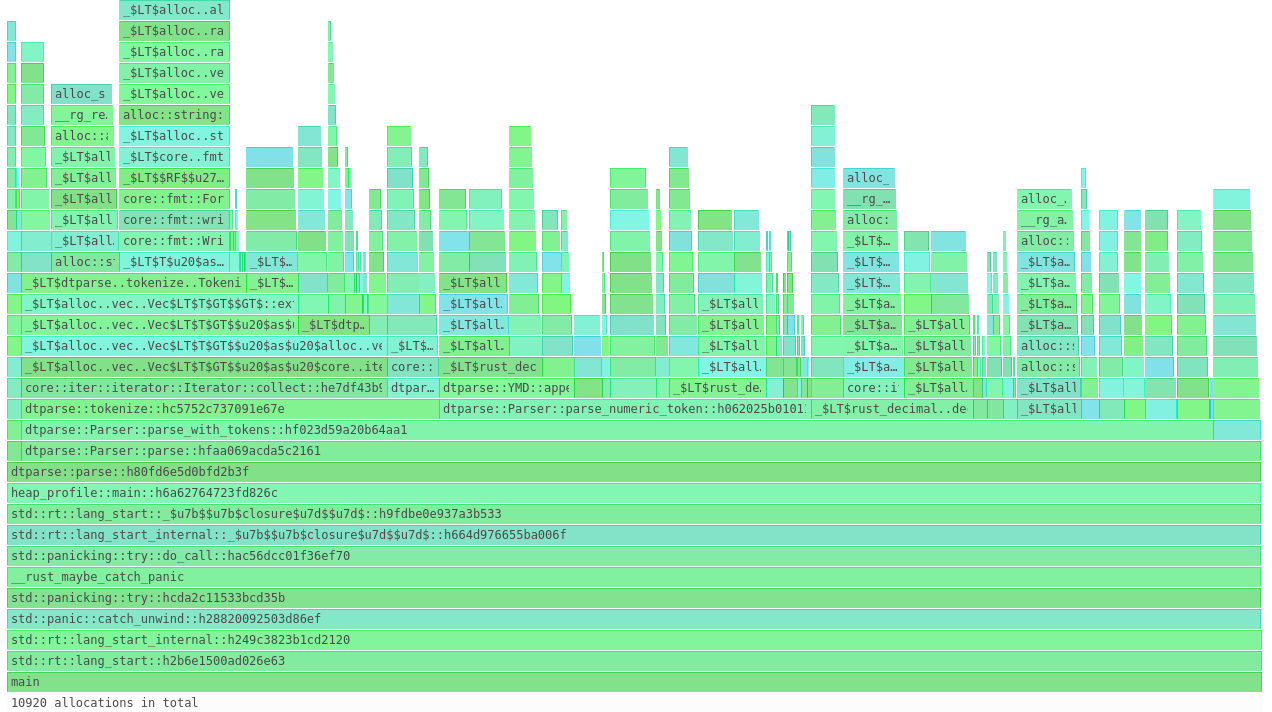 In the end, you don’t need to write a custom allocator to be efficient with memory, great tools already exist to help you understand what your program is doing.

Given that Moore’s Law is dead, we’ve all got to do our part to take back what Microsoft stole.